Visit the mono download page and download the latest release for your Operating System. As the title of the blog post suggests, I am going to be using a Mac. At the time of writing, the stable version of Mono is 6.12.0.

Complete the installation following the guide on the website. Once its complete, Mono command line tools will be available at the path /Library/Frameworks/Mono.framework/Versions/Current/Commands. You can optionally add this path to your $PATH environment variable.

I’ll be making use of make and Makefile in order to write my build scripts. But, you can choose your own preferred tool. Create a Makefile at the root of your repository / project structure.

Next, we will need a build task in the Makefile that will compile the project / solution.

Notice that on the first line, I set a variable for msbuild which points to the msbuild commandline tool that was added by the Mono Framework installation. I then refer to this variable in the build task. If you’ve saved the path to Mono installation location in your environment variable, then you don’t need to declare a variable and can invoke msbuild command directly from build task. Which will be a good idea if the Makefile and task are going to be used from a Windows machine as well. And msbuild command is also resolved on that machine.

At this stage, executing the build command make build will error with the message that NuGet packages are missing. So, lets add a new task to restore the solution.

/t:restore indicates to msbuild that we want to invoke the restore msbuild target. /p:RestorePackagesConfig=true is required if the project uses packages.config file for managing dependencies. You can omit this argument if your .csproj file is using the newer SDK style file. You can also see I’ve specified that the build task depends on the new restore task. Therefore, calling the build task will first run the restore task.

Mono comes with a command line tool called xsp4 that can be used to run a web application. XSP is the Mono ASP.NET Web Server. The process provides a minimalistic web server which hosts the ASP.NET runtime and can be used to test and debug web applications that use the System.Web facilities in Mono. xsp4 is not intended to be used as your production web server. Unless its used as a means for integrating with a production web server such as Apache.

We will call the new task run_web.

Again, run_web task has a dependency on the build task. I am also referring to xsp4 tool via a variable that points to the actual location of the tool. --verbose flag prints extra mesages to the output which are useful for debugging purposes. --applications argument allows you to provide a list of virtual and real directory for all applications we want to manage with this server. The virtual and real directories are seperated by a colon. In our case, we only specify 1 application. At the root (/) virtual directory that is mapped to the relative real directory where the website project is located.

I suggest first reading ASP.NET getting started page on mono project website to learn more about the web server. There are lots of other arguments that you can pass to the tool. Which are documented on the xsp4 manpages.

If you run the new task make run_web, there will be a website running on port 9000 on localhost which you can browse to. As the task output suggests, you can press Enter / Return key to stop the web server running. 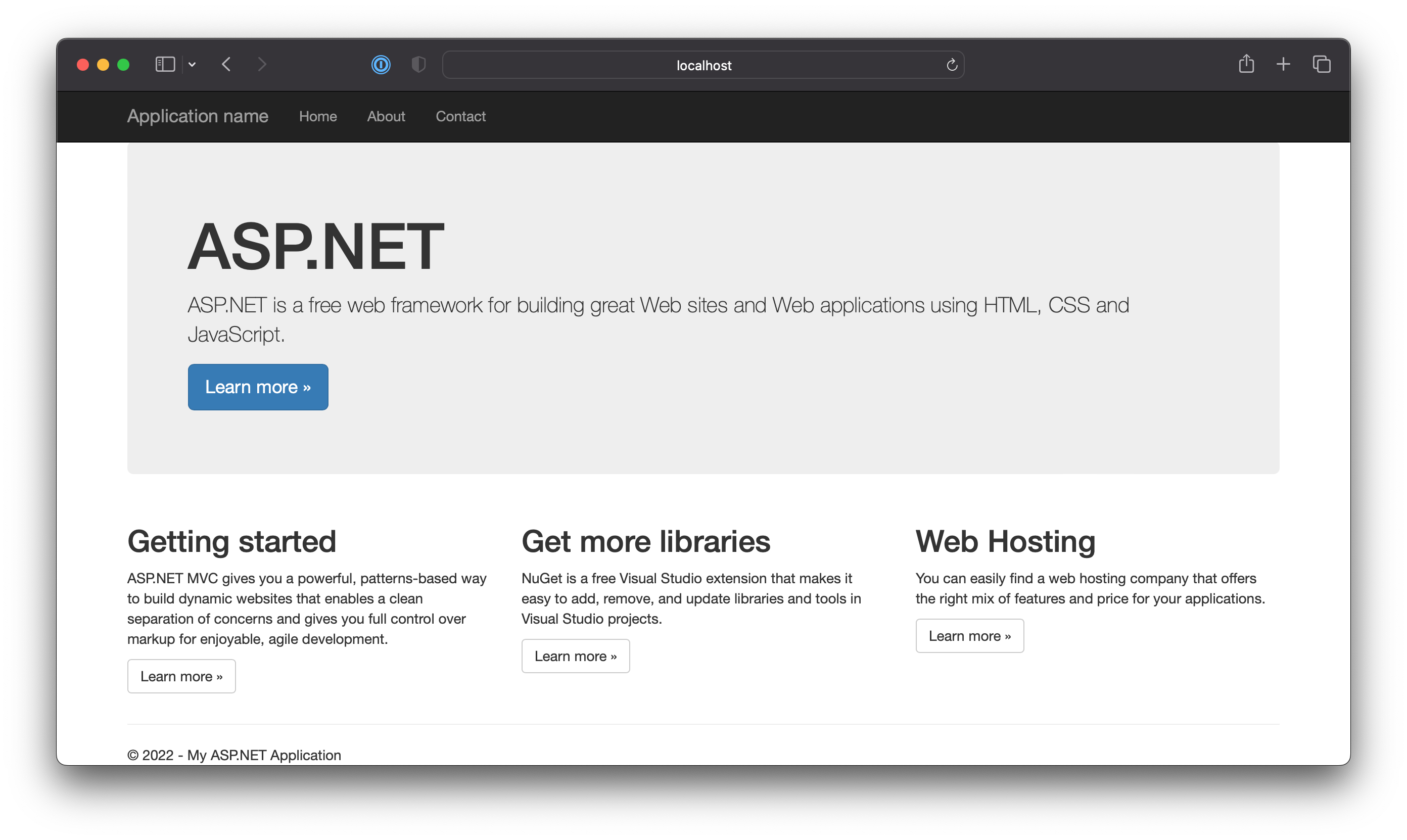 If you have team members using more than one development operating systems, it will be a good idea to make sure your Continuous Integration pipeline builds for all the different Operating Systems. Because it will be easy for one of the team members to introduce a change that breaks the application for others.

Try to move away from .NET Framework as soon as possible into .NET 7 which is latest at the time of writing as they have cross platform support built in.