This is the begining of a multiple part series of blog posts going through setting up Elasticsearch cluster in kubernetes.

The main aim of this series of blog posts will be make notes for myself as I try to learn kubernetes and for anyone in the same position.

In this blog post, I will just concentrate on useful Kubernetes getting started resources, commands, and also with an aim of creating a single node Elasticsearch cluster.

I found the most helpful resource for me was the Kubernetes official website for starting to learn kubernetes. Head over to the Interactive Tutorials section of the website and spend time going through all 6 modules to cover the basics. It should only take you 1 - 2 hours. You won’t have to install anything to try it out.

The next step I took was followed the Hello Minikube tutorial. This helped me to get minikube and kubectl commands installed. (Minikube is the local development Kubernetes environment and kubectl is the command line interface used to interact with Kubernetest cluster).

One or two commands that I use in this post will be mac specific. Reference this guide to get more up to date and OS specific commands.

Once you’ve got the tools all installed, you can now follow along these steps to create a single node Elasticsearch cluster.

If you are using Minikube, make sure that its started properly by running this command (for mac):

Now set the Minikube context. The context is what determines which cluster kubectl is interacting with.

Verify that kubectl is configured to communicate with your cluster:

To view the nodes in the cluster, run:

Minikube includes the kubernetes dashboard as an addon which you can enable.

You can enable an addon using:

You can then open the dashboard with command 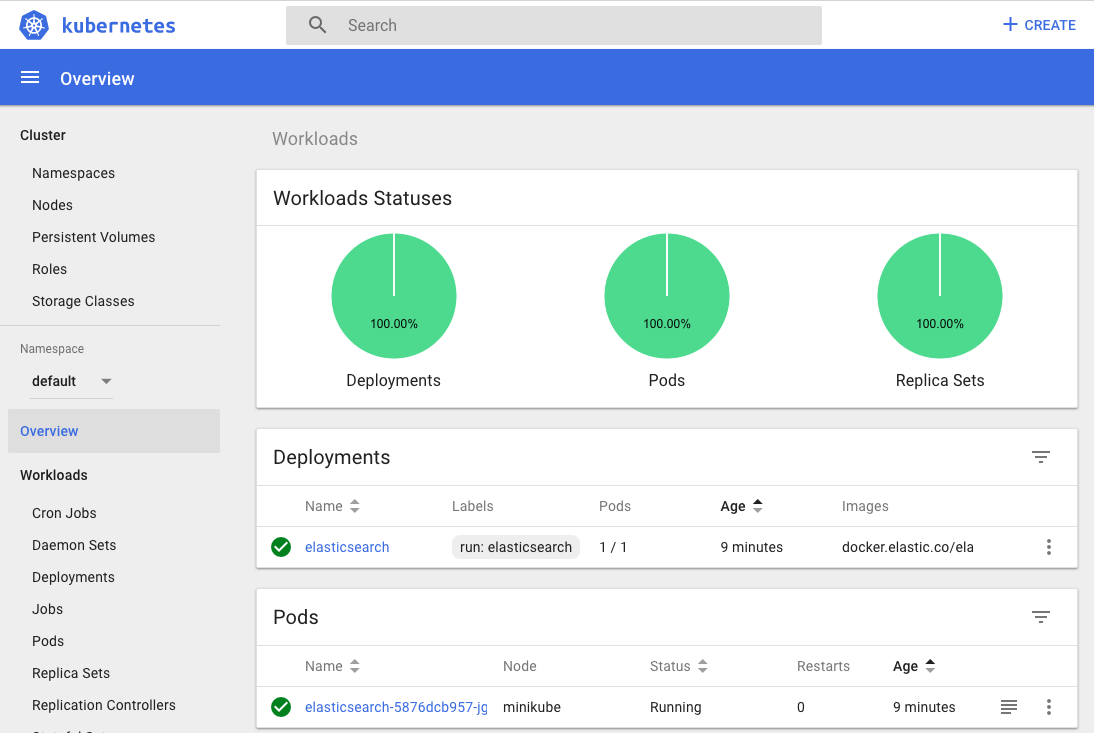 Let’s start off by creating a single node elasticsearch cluster. According to the elasticsearch documentation, the current version at the time of this writing is 6.1.1. And there are three flavours of docker images. We will just use the basic image which has xpack and free license.

Run the following command to deploy elasticsearch container into our kubernetes environment exposing just the port 9200. There is no way to expose multiple ports using the kubectl command line currently. We will probably revisit this in a later post.

To list all pods and watch the container getting created:

Save the pod name as a variable for use in later commands.

Note: The above command will not work if you have multiple pods.

Now, you can take a look at the logs using the command:

We can verify that the cluster is running by looking at the logs. But, let’s check if elasticsearch api is responding first.

In a seperate shell window , excute the following to start a proxy into Kubernetest cluster.

Now, back in the other window, lets execute a curl command to get the response from the pod via the proxy.

Great, everything is working.

Now, lets expose this deployment to outside of Kubernetes network:

Pro tip Use MiniKube to open the service in your default browser.

In my case, the port that was assigned to this pod was 31389. But, we have elasticsearch cluster now running in Kubernetes!